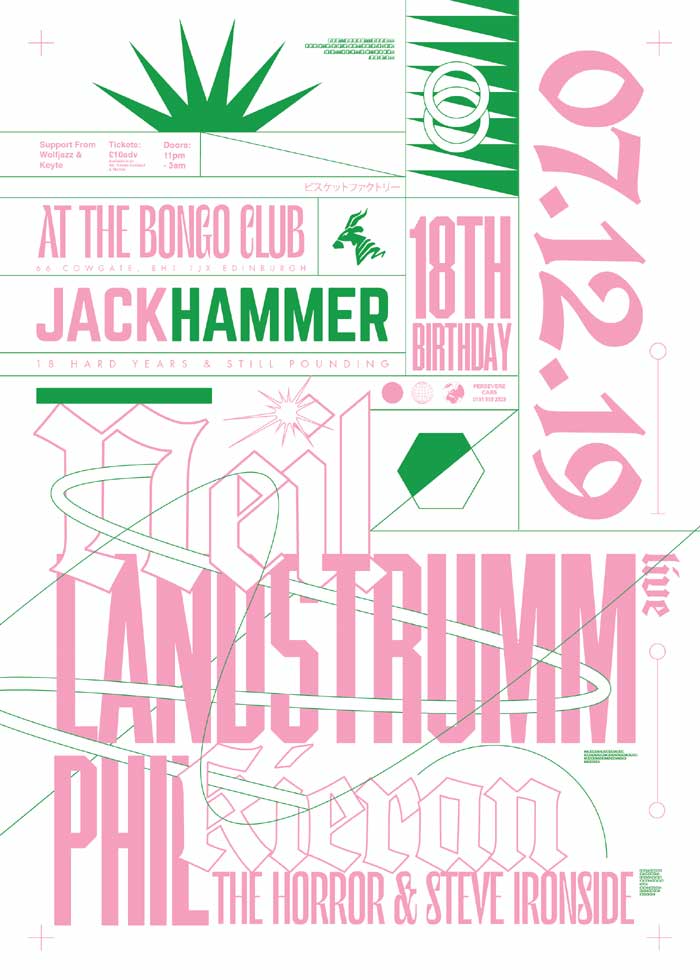 Jackhammer return to The Bongo Club for Part 1 of our 18th Birthday celebrations. Live techno special

Phil Kieran is a DJ, music producer and electronic music recording artist from Belfast, Northern Ireland.  Kieran is primarily a club DJ, making his name as the resident at Shine in Belfast and later playing at venues across the world. He plays a wide variety of music including techno, breaks and house. Kieran has released numerous 12″s that have received recurring airtime on Radio 1 and featured on mix CDs by DJs such as Carl Cox, Pete Tong, Slam and on various Global Underground mixes such as Deep Dish’s GU021. He Released his first album as Le Carousel in 2013. The Album is titled ‘Carousel’.  He has recorded for the DMC, Skint, Yoshitoshi and Shine labels. In 2002 he was awarded the Best Dance Act award at the BBC Hot Press awards.  In 2005 he formed a band called Alloy Mental, a collaboration with Irish singer-songwriter Martin Corrigan. They released four 12″s and followed this up with the June 2007 release of the album We Have Control. They also played a live set on Annie Mac’s Radio 1 birthday show. Mac and Kieran became friends while working together at Shine in Belfast. A set mixed by Kieran was featured on BBC‘s Essential Mix on 15 April 2007.

Edinburgh techno legend Neil Landstrumm needs no introduction but, for the uninitated, this is quite a good place to start…