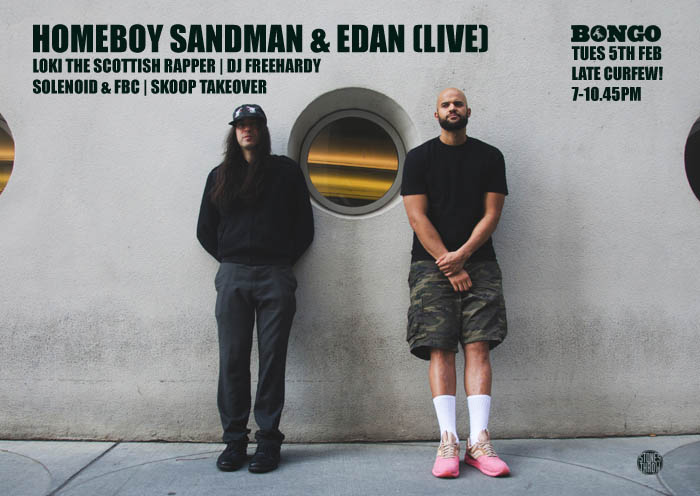 Homeboy Sandman is an MC from New York, Edan a rapper, producer, turntablist and multi-instrumentalist originally from Baltimore via Boston – both formidable solo artists in their own right and now an even more potent hip hop duo signed to legendary US label Stones Throw.

People are still talking about the last time Homeboy Sandman played Edinburgh (The Mash House, 4 years ago) and people have never forgotten the last time Edan was here (the old Bongo, in Moray House, for Triptych ’06!). Fans of real hip hop music will definitely not want to miss such a rare live event in Scotland’s capital city.

Support from Solenoid, FBC, DJ Freehardy plus SKOOP Takeover.  PLUS Loki The Scottish Rapper has now been added to the bill!

NB Please note the curfew for this event will be later than a regular gig, to give everyone the best experience/value for money etc (and Homeboy Sandman & Edan’s set is 90 mins long).

Thanks to his inventive flows, literate lyrics, and dry sense of humor, Homeboy Sandman emerged as one of the most original, prolific underground rappers of the late 2000s and 2010s. With verbal styles ranging from vitriolic screeds to stilted stream-of-consciousness narratives, his songs often criticize the conventions of hip-hop, in addition to examining societal issues and lighter subjects such as the joy of healthy eating. After making a name throughout the underground New York hip-hop scene with independent releases such as 2008’s Actual Factual Pterodactyl, Sandman received wider exposure when he signed to California’s Stones Throw label during the early 2010s and released acclaimed albums such as 2012’s First of a Living Breed and 2014’s Hallways. Sandman has also released collaborations with Aesop Rock (several EPs beginning with 2015’s Lice) and Edan (Humble Pi).

Angel Del Villar II was born to a boxing father who emigrated from the Dominican Republic to New York and fought on the heavyweight circuit. Retiring undefeated, Del Villar’s dad then went to law school to become a community lawyer, a path his son would follow for three years before dropping out. At first, he was to become a teacher, but just moonlighting as an MC wasn’t enough, so with the 2007 release of his debut EP, Nourishment, he went with hip-hop full-time. After Nourishment 2 (Second Helpings) expanded the EP to album length, his official debut album, Actual Factual Pterodactyl, followed in 2008. DJ Spinna and Ski Beats would both lend a hand to his 2010 album, The Good Son, released the same year that Sandman would be featured as an aspiring rapper’s mentor on the MTV reality television series Made.

In 2011, he signed with Stones Throw and released the Subject: Matter EP. His first full-length for the label, 2012’s First of a Living Breed, featured production from the likes of Oh No, rthentic RTNC, Oddisee, and Jonwayne. Oh No was joined by Blu and DJ Spinna on the 2014 album Hallways while that year’s EP, White Sands, was produced by Paul White. Whitereturned for the 2016 LP Kindness for Weakness, which also featured production from RJD2, Georgia Anne Muldrow, and Large Professor. Just a year later, Sandman released his seventh album and fourth for Stones Throw, Veins. Humble Pi, a collaboration with Edan. [Artist Biography by David Jeffries]

Nicknamed the Humble Magnificent, Edan is a multifaceted hip-hop artist whose music is equally reverential to old-school rap and ’60s acid rock, yet sounds utterly fresh and innovative. Delivering sharp, witty lyrics with gusto over echo-slathered beats, his music is wilfully eccentric without sacrificing an ounce of funkiness. A triple threat on the microphone, as a producer, and behind the wheels of steel, his music work caught on first among the progressive cognoscenti of London, but had such exuberance and appeal that it was only a matter of time before it staked out territory on its home turf as well. His proper albums Primitive Plus (2002) and Beauty and the Beat (2005) are hailed as underground cult classics, and his mixes (including 2009’s inventive Echo Party) and performances have similarly received high praise. While less active as a solo artist during the 2010s, he has collaborated with numerous artists throughout the decade, including Cut Chemist, Your Old Droog, and Homeboy Sandman (as on 2018’s Humble Pi). 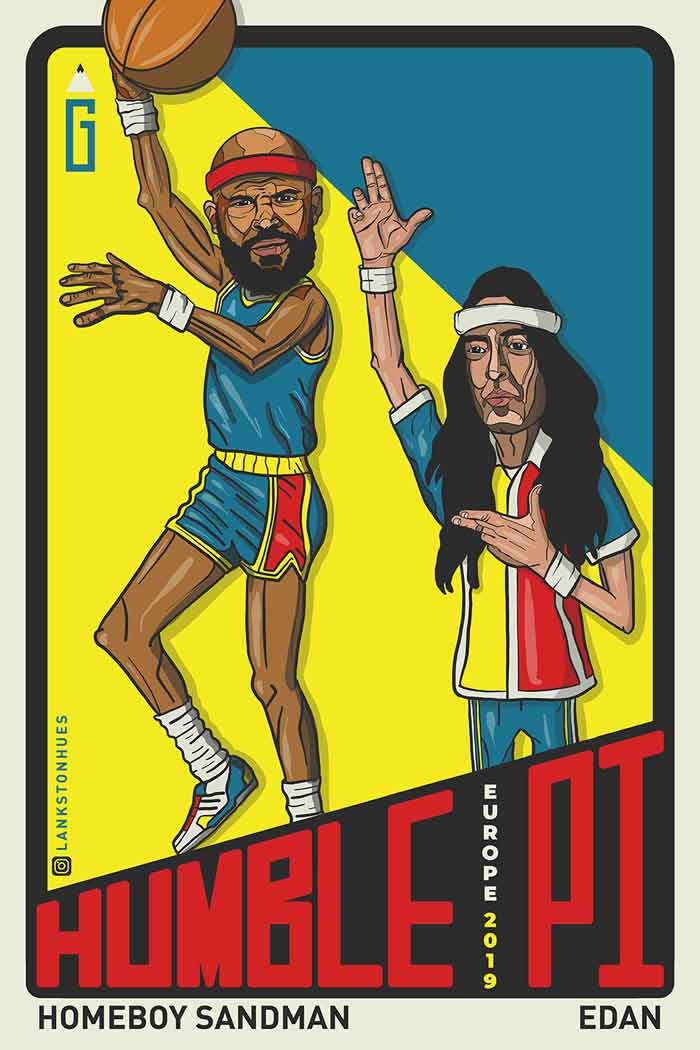 Edan Portnoy grew up a musically inclined loner in the suburbs of Baltimore, Maryland. Inspired from an early age by the Beatles, Jimi Hendrix, and psychedelic rock, he picked up the guitar and bass during his adolescent years, but when N.W.A. dropped Straight Outta Compton in 1988, it instantly captured the ten-year-old’s imagination and altered his musical path. By the time he was a teenager, Edan had begun to dig up and collect rare LPs and try his hand at making elementary beats inspired by the likes of Main Source, Pete Rock & C.L. Smooth, and the Native Tongues family, as well as old-school heroes both famous (Slick Rick, Big Daddy Kane, Ultramagnetic MCs) and obscure (DJ Cash Money, Percee P). After graduation from high school, he moved to Boston to study guitar at the Berklee College of Music, ultimately dropping out before taking a degree but not before delving into production and engineering. His new-found technical facility helped as he began creating his own tracks and, due to lack of an MC, rhyming on them as well. It resulted in a series of CD-Rs (including an unofficial debut album called Artchitecture and an early version of Primitive Plus), sold mostly at live gigs around Boston, and now-classic 12″ singles, culminating with the much sought-after “Sing It, Shitface,” released by Boston indie Biscuithead Records in 1999.

Very much an acquired taste, Edan‘s popularity began to spread slowly throughout England. Due to its built-in fanbase of vintage hip-hop, the rapper was given a measure of respect in England that was difficult to come by in his home country, and British promoters took the opportunity to fly him over for well-received live shows. Following the 2001 mix CD Fast Rap, British label Lewis Recordings released a proper edition of Primitive Plus in early 2002. The album received rapturous reviews both in America and overseas. He followed it several months later with an EP, Sprain Your Tape Deck, also on Lewis, as well as outside production for and collaborations with Count Bass D (“How We Met”) and Mr. Lif (“Live from the Plantation”), among others.

Several more singles and a James Brown-nodding 2004 mix (Sound of the Funky Drummer) preceded Edan‘s second full-length, 2005’s Beauty and the Beat. A psychedelic rap masterpiece, the album was met with heavy acclaim as well as U.K. chart placings. Edan seemed to vanish from the scene shortly afterwards, but he returned with 2009’s Echo Party, a dense 29-minute megamix of tracks from Traffic Entertainment Group’s vaults, painstakingly assembled and enhanced with additional instrumentation from Edan himself. Since then, the reclusive musician has kept busy behind the scenes, producing or contributing guest verses to Blu, Memory Man, Mr. Lif, and several others. After producing “Talking (Bleep)” on Homeboy Sandman‘s 2016 album Kindness for Weakness, the duo teamed up for 2018’s Humble Pi.  [Artist Biography by Stanton Swihart] 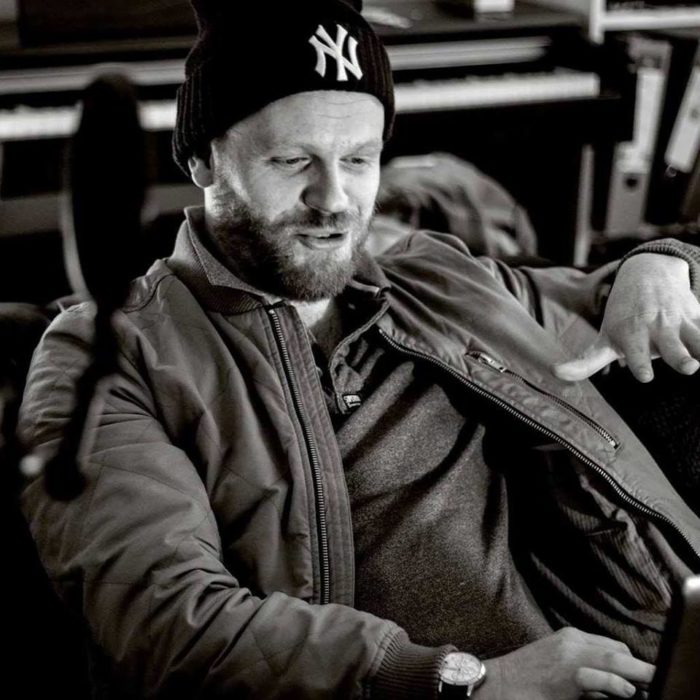 Loki, real name Darren McGarvey, is a Glasgow-based author, performer, community activist and journalist. Loki’s central role in the development and evolution of Scottish hip-hop cannot be understated, and his influence as a writer and performer can be felt wherever Scottish rap is found. 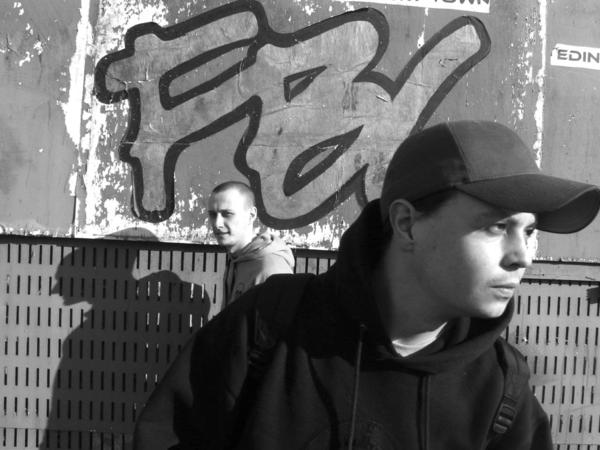 Local legend (for all the wrong reasons) Pedro Solenoid (FBC) will be showcasing his formidable hip hop skills, supported by collaborators past and present. Presenting all new material, as well as dusting off the Fountainbridge classics. Expect Solenoid & Co to get Auld Reekie rocking.

Mixtapes taking the form of whatever the mood is at the time. BANDCAMP

SKOOP is a collective of creatives from Edinburgh: producers, MC’s, artists, promoters, designers, photographers and videographers, brought together by a love for hip-hop, wonky beats and electronic music across the spectrum. Their live sets usually comprise a cohort of Scotlands finest MC’s including Tzusan, CRPNTR, Papillon, Skillin + Teknique backed up by an array of lethal DJs.

Launched in 2017, The crew has been building a name for themselves by peddlling off-kilter music and visuals through a stream of collaborative releases and solo projects. Recognized by publications such as Dopezine, Loose Lips and The Skinny as a crew to watch, SKOOP’s profile is only on the up. Expect them to continue making waves thorugh their psychedelic art style, eyes down parties and a healthy disregard for genre boundaries.