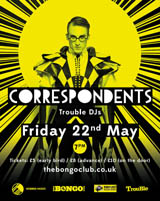 Trouble & Hobbes Music are proud to present the return of unforgettable London duo The Correspondents. Last seen at the Bongo back in 2011, they’ve been working non-stop, taking both the London club/gig and summer festival circuits by storm, not to mention developing a devoted following down under and over half a million YouTube hits for the single, Fear & Delight, from their debut album, Puppet Loosely Strung (see clips below).

Now something of a global phenomenon, with front-man Mr Bruce also boasting roots as resident MC at the hugely successful, original Trouble nights across Edinburgh (and beyond), while completing his fine art degree here (2003-07), this event will be an emotional homecoming of sorts for him and an unmissable gig for old fans and new alike.

If you’ve never seen The Correspondents before, prepare to be swept away by the humour and infectious energy of their incredible live show.

Read our Ten Questions For The Correspondents

The Correspondents consist of a singer, Mr Bruce, and a producer, Chucks. Both growing
up in South London, they formed in 2007 and within two years had taken their hi-octane
genre-blending dance music from house parties to festival main stages.  The show that quickly established the duo as one of the best live acts in the UK has Mr Bruce assuming the look of a monochrome matador, singing with force, scatting at speed and dancing like his life depends on it while Chucks takes the audience on a journey through a multitude of genres from jazz and blues to the nether regions of electro and drumʼnʼbass.

Since their inception, they have toured far, wide and relentlessly, bringing their unique live
show to huge crowds (regularly playing to over 10,000 revelers) earning themselves
Telegraphʼs ʻTop Ten Glastonbury Highlightsʼ two years in a row. Any time off the road is
spent in the studio making music. Their live sets are constantly evolving with regular
insertions of new tracks. However, it wasnʼt until March 2014 that they pulled together a
body of material that they were happy to release as an album. Self produced, recorded
and released, ʻPuppet Loosely Strungʼ features tracks that are synonymous with their
trademark sound of unique, genre-mashing alternative pop proclaiming the highs and lows of love and lust. This release also reveals a more introspective side of the pair with
delicately produced songs that investigate personal loss.

Aside from the music itself, The Correspondents have become renowned for their videos
that are consistently unique in style and pioneering in technique. ʻWell Measured Viceʼ and
ʻGive You Betterʼ were brought to life by Mr Bruceʼs own hand-drawn animation. ʻAlarm
Callʼ was also produced by the singer, he creates time lapse/stop-motion painted portraits
to chart the lives of two characters over 21 years. And the award-winning ‘Fear and
Delight’, by visionary film-maker Naren Wilks, was made using a ‘composite camera’
technique allowing numerous versions of Mr Bruce to dance kaleidoscopically in the same
space.

The Correspondents are at an exciting point in their career where years worth of worldwide touring, musical experimentation and video production has come together with the release of their debut album and laying the seeds for the next.

“3. For crowd atmosphere, energy and a burst of endorphins. The Correspondents won hands down. The band is made up of Mr Chuckles, a producer and DJ of extraordinary skill and Mr Bruce, the most charismatic frontman I watched all weekend. They play swing-hop with Mr Bruce scatting, singing and rapping over Mr Chuckles’s swing samples and drum loops. At one point, Mr Bruce brought out a conveyor belt and used it to dance his socks off and whip us into a frenzy. Go and see them live if you can.”
TOP TEN HIGHLIGHTS OF GLASTONBURY 2010 – TELEGRAPH.CO.UK

“The Correspondents aren’t the first group you’d expect to see at a South London dubstep/fidget house night and yet their performance at Corsica Studios over a year ago had everyone quickly switching their allegience from wobbly basslines to beats over samples from ‘The Jungle Book’. The skin-tight trouser clad MC Mr Bruce strode to the stage and began shaking his impossibly long legs to the beats put down by his DJ, Chuckles, and from that point on, everyone was a convert.”
NME.COM

“Pop also-ran Frankmusik was far more exciting, revealing his ‘great voice for a white boy’ but also the overly perfect future pop that’s thus far prevented him finding fame with a mass audience. One duo who could, however, are the Correspondents, who filled in between sets throughout the weekend. With fast-spit rhymes over twenties flapper tunes, and MC Mr Brogues a gangly enthusiastic dancer with natty threads to match, these two deserve a stage all themselves.”
INTHENEWS.CO.UK – BESTIVAL REVIEW

“My fear for the contents of my wallet and the softer parts of my anatomy were quickly replaced by joy at the sights and sounds of The Correspondents. These two dapper purveyors of swing-hop derring-do pretty much stole the show. I’m proper feeling the vaudeville approach to hip-hop (cfThe Anomalies, Krugers passim), and The Correspondents are amongst the most charming to take that approach. Everyone had a sing-a-long with them. Aww. Find them on MySpazz – you’ll be glad you did (and relieved MySpazz still has its uses).”
KRUGERS MAGAZINE – DAEDALUS @ CORSICA STUDIOS REVIEW

“A stark contrast with the reaction received by The Correspondents, the Wandsworth duo who wander onto the Great Stage in the middle of the hottest day of the year and through the skatting, scratching and infectious dancing of the Mask-a-like Mr Bruce, managed to persuade everyone to forget their heat induced woes and dance like they had some serious itch to scratch. Forced back on to the stage by a fiery and pumped up crowd demanding more, Mr Bruce and compatriot DJ Chuckles then do it all over again, much to the amazement of them and their newly acquired groupies. Which goes to show the wonder that is Secret Garden Party. Hierarchies are toppled and the unknown underdogs are taken into the bosoms of the crowd while the headlining 80s superstars are made to look like, well, bosoms.”
LOUD AND QUIET MAGAZINE – SECRET GARDEN PARTY REVIEW

“Sunday starts with a beautifully bizarre moment, as Wandsworth swing-hip-hop duo The Correspondents enthral an unfeasibly huge midday main stage crowd with a rendition of ‘I Wanna Be Like You’ from The Jungle Book. After that we’re delirious putty in their capable hands and the stunned pair are summoned back for a giddy encore.”
WWW.VIRTUALFESTIVALS.COM – SECRET GARDEN PARTY REVIEW