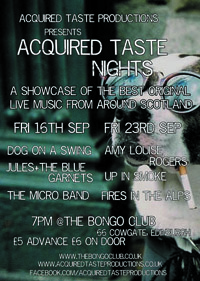 Acquired Taste Nights is a showcase of the best live music around, a place where you can come and see your favourites or discover something new.

Amy Louise Rogers
Amy Louise Rogers is a 17 year old Scottish singer songwriter with a difference. Combining conversational lyrics, catchy pop melodies, and a strong stage presence, Amy paints the picture of living as a young person who doesn’t exactly fit into her given box.

With her second EP “Her Stories” due out September 17th and a certain song about a marine biologist gaining recognition from Charlie Ashcroft and Jim Gellatly , the musical future is looking bright for Amy.

Up in Smoke
Up In Smoke is a three piece acoustic Indie Folk band from Ayrshire, Scotland. Formed in January 2015, the band have played regular gigs to a fantastic reception, reflected by a growing number of genuine fans, who are loving their unique and stunning sound.

Up In Smoke are extending their popularity through their powerful live performances of original, beautifully crafted and fresh music that are a fusion of acoustic, hip hop, and experimental elements making every song a compelling listen. The debut album, ‘Time Just Flies’, is a musical journey that reflects back to the days when albums were created as a dynamic musical whole, yet with each song standing as a work of art on its own.

Up In Smoke remain independent and LC Recordings is the bands own studio and label which they use to release their music, as well as helping other emerging artists to record and produce music without having to be signed.

Fires in the Alps

Acquired Taste Productions, formed in 2014 as a student project, is a live music events and promotion company, based in Fife, Scotland. Acquired Taste, run by audio engineer Sarah May and singer and performer Chloe-Anne Watson, believe that musicians should always be paid for their work and are an artist friendly company. Every ticket sold is split equally to support the performers and help Acquired Taste continue to grow and bring more of the best live music to audiences, in a safe, fair and supportive environment.

After testing the waters last November with a successful showcase night at Edinburgh’s Cabaret Voltaire, Acquired Taste have put on a monthly acoustic night at Kirkcaldy’s Cupcake Coffee Box which received glowing reports for its intimate surroundings and excellent choice of artists. With their studies now finished, Acquired Taste can concentrate fully on putting on the best showcase nights across Fife and Edinburgh and turning their passion for live music into a venture for everyone to enjoy.

Acquired Taste Nights is the company’s latest project and brings Acquired Taste’s special, memorable evenings of live music to Edinburgh’s fantastic Bongo Club. Showcasing three of our favourite performers each night, Acquired Taste Nights is an evening for both fans and audiences to discover something new at the bargain price of £5 (£6 on the door). Come along and support our local artists, while having a great night of music and fun.