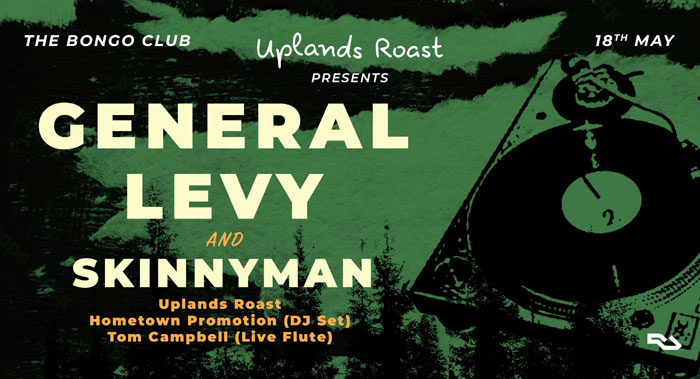 “We have been very excited to announce this massive line up! Two of the UK’s most top ranking and well respected MCs in both the Reggae and Hip Hop communities alike… We have pulled out all the stops to bring a night of top class acts as a celebration for the start of the summer and for all the folk who have supported us…The students leaving now in 4th year have been with us from the start when we first came to Edinburgh 4 years ago! Now is the time to pull off the biggest and best Uplands Roast night so far…

General Levy: a true veteran of the UK urban music scene, and still one of the most in demand MC’s in the country. Incredible…

Skinnyman: often said to have the released the best UK Hip Hop album ever made… From totally underground roots to the release of ‘Council Estate of Mind’, Skinnyman is one of the most respected MCs in the UK.

Uplands Roast Glasgow
An eclectic selection of reggae and dub from Phil who runs Decades of Dub (and Uplands Roast!) in Glasgow.

Starting at 10pm – get down early! The Bongo Club have a brand new top spec and top of the line sound system which has just been installed – so we are set for a real treat… We cant wait to see you there! If you have any questions please send us a message or email us at contactus<at>uplandsroast<dot>com.