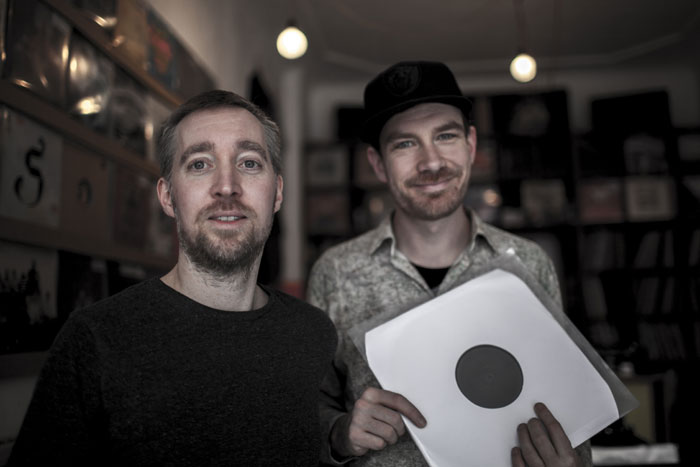 Here’s a copy of a recent interview they did with Flux Music to give you a bit more background to this talented pair:

Trump, Brexit, divisive politics, the overzealous policing of raves and this general air of malaise has turned a lot of us into cynical and jaded folk – and in many ways, this seems to be mirrored in a lot of the darker music coming out. But they say you need the rain to have the rainbow, and Session Victim are exactly that – a burst of colour and optimism in a cloud of darkness and grey.

Hauke Freer and Matthias Rieling comprise the self-dubbed ‘2-man house band’, blending the rawness and spontaneity of a raucous live gig with the almost spiritual pulse of a DJ set where the entire crowd moves in unison as a nebulous school of dancing fish.

They are also accomplished solo artists in their own right, with releases on the Giegling and Delusions of Grandeur imprints amongst others – and Matthias’ new EP drops on Session Victim’s own label Pen & Paper this week. We caught up with Matthias and Hauke, based in Hamburg and Berlin respectively, to discuss the German music scene, their Pen & Paper label and playing house music live…

Hi guys. What’s the genesis of the Session Victim name? Is it somewhat autobiographical?

Matthias: Hi! I don’t remember exactly how we came up with it, but it was right before we released our No Friends EP on Real Soon. For us it describes that moment in the studio, jamming, when it transcends from you playing the music to the music playing you – if that makes any sense. When we told [Real Soon label owner] Paul Hammond about it, he instantly liked it so we went with it.

Session Victim often feels a little sunnier and in stark contrast to the darker, more brooding form of dance music Germany has come to be known for – would you agree with this, or is there a thriving Berlin/Hamburg community within which you cultivate this brighter sound?

Matthias: We are and have always been friends with a lot of musicians and DJs in Berlin and Hamburg, and we get to meet new interesting and inspiring people all the time. So, of course there is a bigger, loose community, but this community includes people from everywhere around the world just as much as it does Germany. What comes out of Session Victim is basically just the stuff that the two of us both feel together – that goes for what we write and produce as well as what we spin as DJs. However, we are lucky and blessed to be surrounded by so many talented people and I would love to name them all now – but it would be a very long list and I would forget someone in the end and feel bad about it forever.

Your ‘2-man house band’ vibe really shines through – there is this raw, live feel to it. The jazz club-esque intro at the start of Listen To Your Heart, opener ‘Over and Over’ followed by the sample of Rasa’s ‘When Will The Day Come’ really emphasises this. How do you guys manage to make it so cohesive and organic when collaborating remotely?

Hauke: To be honest, we don’t actually collaborate remotely. Our studio has been in Hamburg for the last 5 years. I take a train during the week and we lock ourselves down for 2 to 3 days. Many people mention that they perceive our music as organic. It’s hard to put a finger on it, but I think it’s a mixture of using many samples that come with their own rich colours, textures and timing as well as attention to layers and details. And really important is to avoid thinking too much within the grid.

What is the impetus behind the live show, and why is it so important to you guys?

Matthias: Because it’s a ton of fun! It’s something we practise but is spontaneous nonetheless, it’s chaotic, it’s emotional, it’s in that very moment, it’s sometimes scary but at the same time something we both feel super confident about… yo, it is a whole lot of things to us!

Your live shows at the Jazz Cafe seem to have gone down in folklore, especially with Matthias’ crowd surfing. The energy of your productions seems to come from both your music and your physicality when performing, an observation that’s drawn comparisons with the Duracell rabbits on YouTube. Where does the energy come from?

Matthias: Haha, that sounds too big and cheesy to me. We just play music, we get into it, emotionally and physically, we give our energy into the audience, and receive energy back. As for the stage diving, when that happened at Jazz Café, I was just overjoyed with the music and the vibes at that moment and the audience made me feel so safe and good that it just happened. However, it is not a premeditated stunt or gimmick, and I don’t do it every other show. It was just a very intense night – in a good way!

How did the collaborations on your ‘Dawn EP’ with South London’s Nebraska and the German Iron Curtis come about, and why/how did you approach it this way after several albums of it just being the two of you?

Matthias: Nebraska and Iron Curtain are longtime friends of ours, and they both visited us at our Hamburg studio last year to jam on music. There wasn’t a preordained plan to do a collaboration EP before, the tunes we came up with just felt right together and when we showed them to DOG they were totally into it as well.

You launched your label Pen & Paper the start of last year with three releases including Iron Curtis and solo stuff from Hauke. Matthias has a forthcoming EP out very soon – what can we expect from this release and what are your broader ambitions for the label in 2019?

Matthias: We started Pen & Paper as our own little playground, and the idea came up after we gave our track ‘Puzzle’ to Iron Curtis and VRIL and they came back with those beautiful remixes. Before we had them, there wasn’t the idea for a release at all, but suddenly it felt like a complete 12” all together. The A side of the second release, ‘Smile’, we had originally planned as part of our third album, but it somehow didn’t feel fitting with the rest of the music, so we decided against it. After ‘Mourn’ was finished, we both immediately thought these two tracks would make a great record together. Hauke’s Higher State of Confidence was a total no brainer for me and I would have probably sent it off to pressing right after I heard the first versions of those tracks. Hyped as I was, Hauke put some more detail work into it and gave ‘Part 1’ to our friend Sam Irl, who did an absolutely amazing job mixing the song. As for my upcoming solo record, I made at least 12 pieces for it of which 3 actually made the cut now, including a stunning Broke One remix of ‘Vibrate’. I’m happy that he pulled the whole EP into slightly friendlier territory with it, as I originally wanted the whole thing to be even darker.

What club or city in the world do you find your music most resonates – what crowds are matching the unbridled energy you bring to your live sets?

Hauke: In the end you can have a great party everywhere, and it’s never possible to predict the outcome of any night. When we play to an audience that appreciates being taken on a journey musically, it’s easier to establish a feedback loop between us and the audience and that’s when we are performing at our best.

What is the summer looking like for you guys? Can we expect some festival appearances?

Hauke: Cannot wait for summer, though sticking to our regular routine of hitting the studio during the week and being on the road on weekends. We are playing around Europe mostly and making longer trips to Mexico, Lebanon, the US and Down Under a bit later this year!

You can listen to and buy ‘The Stone Tape EP’ here.