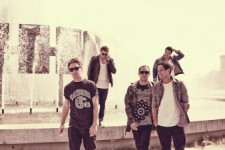 Trouble in association with Spacific presents Six60 plus David Dallas from New Zealand.

After spending most of 2013 in Europe and USA, performing at some of the world’s biggest festivals including Glastonbury, SXSW, The Great Escape, Wavefront, Summerfest andRepeerbahn, Six60 returned to New Zealand for the summer and immediately hit the studio. For these gigs the band are playing a BRAND NEW set that debuts five new songs plus a few other surprises.

Supporting them will be David Dallas with his first ever UK shows.  The past three years have been a roller-coaster for David: he signed to underground powerhouse Duck Down Music in 2011, releasing second album ‘The Rose Tint’ soon after, followed by a tour throughout North America with hip-hop duo Aer.  He recently supported Eminem and Jay Cole on their tours of Australasia.

N.B. THIS GIG HAS SOLD OUT!  Open to ticket-holders and returns only on the night.