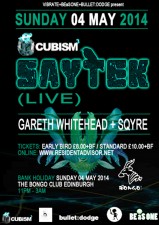 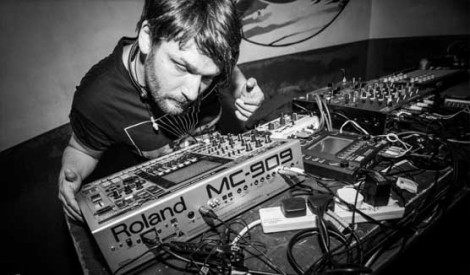 Having built himself a reputation for innovative, improvised sets that span the house and techno spectrum, Saytek Live is now widely regarded as one of the UK’s very best live performers.

A former The Zoo Project resident, Saytek LIVE now boasts two critically acclaimed albums, and a backlog of top-draw releases on labels such as Bedrock, Soma Records and My Favorite Robot Records.

As one of the UK’s most exciting acts, Saytek has carved out a unique position for himself over the last few years. Having built himself a reputation for innovative, improvised sets that span the house and techno spectrum he is now widely regarded as one of the nation’s very best live performers. His expertise and confidence in using hardware to create totally original tracks right before the audience’s eyes creates the perfect blend of entertainment and unpredictability. Merely watching him build his live set via an impressive array of hardware including his trusty Roland MC909, Maschine Mikro, a Kaos Pad 3, Pioneer’s RMX1000, the Akai APC 40 and a DJ mixer is a joy to behold. Performing with all of these instruments through Ableton has now become second nature, meaning every twist and turn is controlled effortlessly, creating a dynamic experience for all involved.

Saytek, real name Joseph Keevill, melds a variety of styles mainly influenced by Detroit and Chicago; house, techno, those deep cutting edge sounds that still resonate with so many people today – though, being a Londoner, there’s a distinctly British flavour that permeates throughout his music. It’s an authentic sound that emanates a timeless quality, echoes of the past are evident, yet the future can be heard just as clearly in Saytek’s work. Years of experience in the clubs of England’s capital city, both as a performer and a partygoer, have informed his output and fuelled a recording career that has lasted over 10 years. He built his name at one of London’s most legendary contemporary clubs, The End, alongside regular stints with Ibiza’s seminal Zoo Project. In the last year alone he’s had release with some of the industry’s most respected labels such as My Favorite Robot, Soma, Monique Musique, Lucid Flow, Love Not Money and Wiggle to name but a few. Keen supporters of his music include Carl Cox, Seth Troxler, Richie Hawtin, Luciano, Danny Tenaglia, John Digweed, Steve Lawler, Claude Von Stroke, DJ Sneak, Dubfire, Derrick May, Laurent Garnier and Nic Fanciulli.

On top of his regular flow of singles and EPs, Saytek’s series of live albums, initially released via Zoo’s own label and, more recently, through his own Cubism imprint have further bolstered his reputation for innovative projects. The most recent, Live On Cubism II, is a diverse yet cohesive composition which combines flecks of acid with tough analogue Detroit flavours and irresistable bumping Chicago grooves. It picked up the Album Of The Month accolade in dance music bible Mixmag, as well as receiving plaudits from across the board, much like his previous efforts.

A solid reputation means Saytek has a constant tour schedule and an ever growing list of live performances, which includes gigs at many of the world’s best-known and most respected clubs, including fabric in London and Space in Ibiza. With each performance it’s as though you’re watching him in action for the very first time, the passion, energy and dedication to his craft is admirable and representative of a man who sincerely loves the music he creates and performs. This is not a jaded old performer doing it for the cash, but an artist who would put the same amount of effort into a headline festival performance as he would into a 200-capacity show.

It’s taken a little over 10 years to get here, but Saytek’s current position as one of the UK’s foremost live performers is an accolade he’s overjoyed to be in possession and, as a result, his work ethic continues to be at an all-time high while his lust for the music is unerring. With a successful 2013 behind him, the coming years are no doubt going to reap even more rewards as his live show continues to evolve and his music gets better and better…

Head of Bulletdodge Records, Gareth Whitehead is a vastly experienced producer, remixer, DJ and artist that has established his own signature brand of deep and dubby tech-house and minimal. His tracks are defined by a crisp, clean production style that highlights his engineering background, yet retain the tasteful musicality and dynamic consideration of an individual that is truly a music lover and artist.

In 2007, Gareth set up his own label, Bulletdodge Records as an outlet for his prolific output, as well as creating a suitable environment in which a wealth of international talent could express itself. Mainly concentrating on tech-house and minimal but never afraid of progression and experimentation, the label has grown to be ubiquitous on Beatport charts thanks to massive support from Laurent Garnier, Christian Smith, Ben Sims, Konrad Black, Martin Landsky, Tadeo, Deep Dish, Anderson Noise plus many more.

After releases and remixes from Spektre, Gene Hunt, Alex Young, Nico Diorio, Hans Bouffmyhre, Roel Salemink, Loweck, My Evil Twiin, Electro Voodoo and Shelley Parker, the label continues to go from strength to strength, yet Gareth’s philosophy remains deep underground, embedded in the community spirit that has seen the electronic music scene become an international enigma and a true alternative.

With releases scheduled for the remainder of the year and beyond, the self-confessed workaholic will remain the driving force behind Bulletdoge Records whilst maintaining a monthly residency and taking Bulletdodge on the road to showcase the labels talent and his own stunning live show.

DJ Producer/Remixer and Promoter of BEaSONE: An artist who incorporates his own VJ LIVE show into his sets where he can. The depth and quality of his track selection shines through and this has transferred and is present in his productions and remixes. Never one to sit in a corner and be pigeon holed by music trends or a specific genre, in his own words “It’s all just quality house music” Over the years he has amassed a vast vinyl collection which allows him a unique versatility between his genres of choice. In his early years as a 14 year old boy, his fascination with electronic music and culture has never waned having initially been infected by an underground party and raves up and down the country.

A deep fascination of music production and the desire to release a record Sqyre set up his own studio in February 2012 and set about learning the craft of Producing Music. In April 2012 Sqyre was signed to the prolific and innovative label that is Bullet:Dodge Records (Scotland) and his 1st release Culture Shock released in October of the same year. Soon after the release of Culture Shock, Sqyre had to change the spelling of his name (Squire) due to copyright and confusion with another artist.

Early in 2013 Sqyre set about his 1st Remix for David Grants EP – The Wynd released via 4House Digital Records (Australia). May 2013 Sqyre has just finished working on another Remix for duo Rose Tinted after this he will be concentrating on releasing his own material and working hard on his own sound and take on the music he Loves, Lives and Breathes.