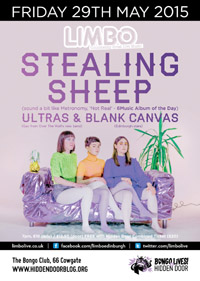 ‘Not Real’ is the much-anticipated second album by Stealing Sheep, written, recorded and produced by band members Becky Hawley, Emily Lansley and Lucy Mercer at their studio in Liverpool. The unifying theme of the new album is the interplay of fact and fiction; the edge of dreams and limits of reality. These visions are grounded by bright melodies and insistent beats and unified by vocal harmonies; sometimes metronomic and chant-like, sometimes choral and pop. On ‘Not Real’ they’ve drawn inspiration from 50’s exotica, electronic music and 80’s pop and been influenced by the likes of Grace Jones, Maya Deren, Eden Ahbez, Delia Derbyshire, Moondog and John Carpenter.

‘Here technology is merely a vessel for a sound that remains pastoral and beguiling. Truly, a class act. 8/10’ (Mojo)
‘An album that’s more mature and focused than Stealing Sheep’s debut, harnessing all of their interesting quirks within a showcase of excellent songwriting.  8/10′ (Music OMH)
”Stealing Sheep’s intoxicating otherworldliness ultimately wins out.  8/10’ (All Music Guide)
‘They pull off shifts in mood and tone with routine aplomb. 7/10’ (Uncut)
‘Stealing Sheep could have easily made another weird art album, and it would have been great; instead, it made a weird pop album, and it’s a bold step into a bigger world.  7/10’ (Magnet)