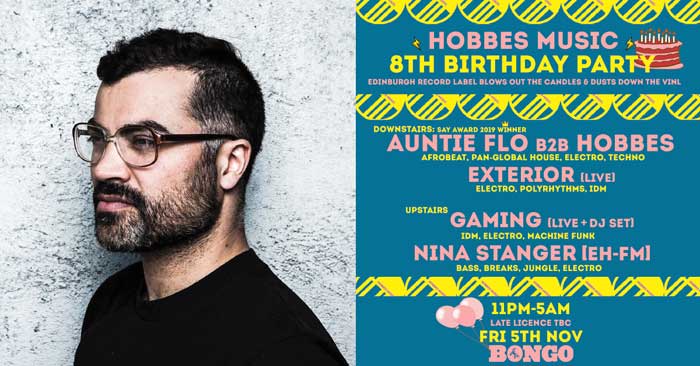 A global player for many years now, the award-winning Auntie Flo (Brownswood, Highlife, Huntleys & Palmers) aka Brian d’Souza is an old friend of label owner Hobbes (via his Highlife and Slabs Of The Tabernacle parties in Glasgow and Pogo Vogue before that in his Edinburgh days).

Way back in 2013, Flo released his much loved Sun Ritual track on the label’s inaugural 12″ (‘Midnight Thunder’ EP), remixed by Neil Landstrumm – a certified rave banger to this day!

…and then remixed Snide Rhythms in his trademark Afro-futurist style on third 12″ EP, ‘Dawn Chorus’.

Both have been DJing for as long as they care to remember, provided DJ sets at each other’s weddings and last appeared behind a set of decks together at d’Souza’s stag party, so it’ll be more than a little bit special for them to get together and do it all over again in a proper underground nightclub with a decent PA.

Expect ’nuff exclusives and fresh cuts alongside classics and old favourites, with unreleased Highlife and Auntie Flo productions as well Hobbes Music label and Leonidas & Hobbes productions  in the mix from both DJs – not least from Flo’s 2019 SAY Award Winning Album, Radio Highlife, and Leonidas & Hobbes’ widely acclaimed EPs: Aranath and Rags Of Time (voted No.1 Release Of The Year by int. DJs for Bill Brewster’s DJ History Podcast).

“Following a number of one-off HM parties with label artists and friends at the Bongo in recent years, this particular combination has also been quite a long time coming and it’s great finally to have Auntie Flo come and celebrate the label’s 8th Birthday with us here in Edinburgh!” says Hobbes.

EXTERIOR released his vinyl debut (EP) on the label, to underground acclaim, in 2019 and his debut album is now in production at the plant (due out May ’22!).

GAMING‘s debut album came out on vinyl via the label to broad underground acclaim, late ’19.

NINA STANGER is a visual artist and co-host of Aberdeen based visual art and club night project Pipe as well as presenting a show on EH-FM.  She has a soft spot for old school/classic 90s sounds (jungle, techno, house, electro, bass, breaks and hardcore) and likes to blend these with contemporary twists.  Nina has been featured on Boiler Room and The Ransom Note recently interviewed her and hosted her Shine A Light On mix.

Ransom Note · Nina Stanger: The ‘Shine A Light On’ Mix