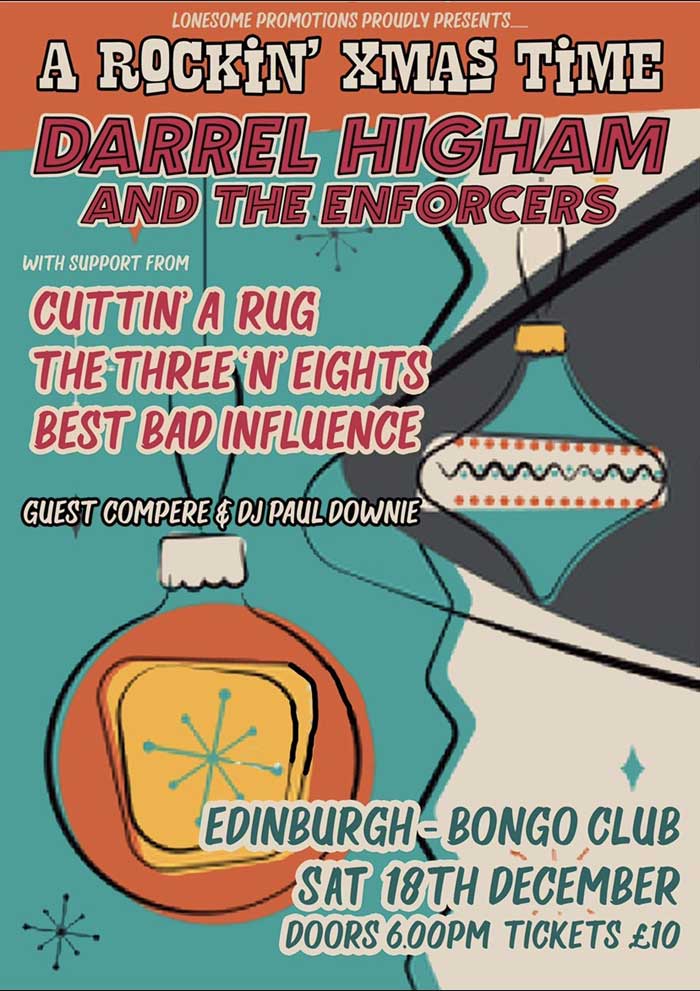 A Christmas Night of Rock n Roll and Rockabilly Music.

A living legend plus three of Scotland’s talented Rock n Roll / Rockabilly bands bringing their own style to Edinburgh.

Plus one of Scotland’ s best known Rockin DJ Paul Downie spinning some discs and Compere.

Darrel Higham the living legend of Rock n Roll Music in the U.K.

Higham grew up listening to the music of Elvis Presley and Eddie Cochran. Through the influence of these artists, Higham took up the guitar in his early teens and joined his first band whilst still at school.
In 1992 he spent 6 months living in the USA; touring and recording with Eddie Cochran’s original backing band, The Kelly Four.
Darrel played lead guitar in the West End production of Elvis: The Musical in 1996. He co-wrote the first biography on his musical hero, Eddie Cochran for Mainstream Publishing in 2000.
In 2007, Darrel started work with Stray Cats drummer, Slim Jim Phantom. Together they recorded 2 albums and toured Europe, even making an appearance on BBC’s Later With Jools in 2012.
He has played guitar for Robert Plant, Jools Holland, Imelda May, Sharon Shannon, Shakin’ Stevens, Jeff Beck, Billy Lee Riley, Rocky Burnette, Bono, Paul McCartney, to name but a few.
Darrel is endorsed by Gretsch guitars, Peavey amplifiers and TV Jones pick-ups. Darrel also helped design The Rockingham semi-acoustic guitar for Peavey.
4 bands and a DJ for only £10: Edinburgh’s best pre Christmas cracker of an event.
TICKETS
CUTTIN’ A RUG are a 4 piece Rockabilly/ Rock n Roll band formed back in late 80’s we play our own original songs and covers depending on the occasion and gig. Our set has a varied recipe of sun sounds to swing/jive,  blues and good old rock n roll classics.
BRAND NEW CADILLAC VIDEO
BLUES IN MIND VIDEO
THE THREE ‘N’ EIGHTS describe their sound as “Rock ‘n’ Roll with a double shot of Ska. Their live set is likely to include original material mixed with their take on classic tunes from artists as diverse as Johnny Cash, Elvis, Toots and the Maytals and Gene Vincent.
THE BEST BAD INFLUENCE are a young Rock’n’Roll Rockabilly band. “We play a mixture of the old originals and our own sounds in our own fast, raw, and energetic way. Our videos are on Facebook. YouTube, Twitter, Instagram and our Album is on all streaming platforms”
Event type:
Tags: Cuttin A Rug, Darrel Higham & The Enforcers, gig, The Best Bad Influence, The Three N Eights