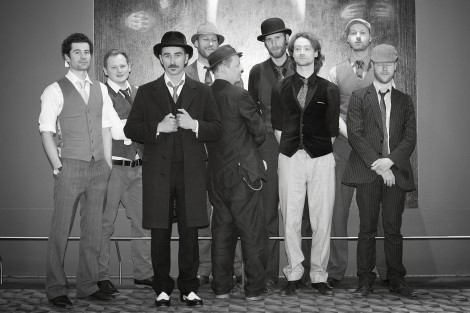 An evening of wicked music to shake the cobwebs from your bones.

The B.D.E cordially invite you to come and enjoy the evening’s entertainment and to help raise funds for the their Canadian tour, as they head to Toronto to appear at NXNE Festival this June. The Black Diamond Express will also be performing material from their forthcoming second album, The Year of The Snake.

Support comes from one of Edinburgh’s finest up and coming acts, The Jellyman’s Daughter. The duo play with a maturity that belies their tender years. Having honed their skills with the Tinderbox Orchestra, they display a perfect balance of technique and expression. Mixing renditions of old time standards with sublime original compositions featuring vocal harmonies backed by cello and guitar all threaded together with a strong Americana influence. They will stop you dead in your tracks.

Formed in 2007, the BDE have garnered praise on the back of an extensive catalogue of new music, stirred with a large measure of roots and blues. They are described by The List as “a 9-piece soaked in poetry, myth and bourbon… The BDE somehow stay true to both Robert Johnson and The Sex Pistols… armed with bellowing sermons and a swaggering, suited performance equally worthy of The Spiegel Tent or Glastonbury.” Their synergy and on-stage presence ensure that everyone – both band and audience – enjoy themselves. These factors made the unorthodox decision to release a ‘live’ first album a remarkably easy one, even though the process was more challenging than traditional routes.

The band were last year nominated for a Scottish BAFTA for their work on the short film ‘A Zombie Musical’. In another outing members were closely involved with flourishing educational project ‘The Tinderbox Orchestra’ and performed for the Dalai Lama on his recent State visit. Adding to a loyal and committed fan-base, this is a band with celebrity endorsement.

“I freakin’ love The Black Diamond Express,” enthuses Never Mind the Buzzcocks comedian Phil Nichol. “It’s the only trip I’ve ever been on where I’ve enjoyed the journey more than the destination. Actually, that’s a lie – I enjoyed the destination too.”

As well as the successful May 5th (2013) launch of their long-awaited opus at The Voodoo Rooms in Edinburgh, the band opened the year supporting American giants The Mavericks and legendary group ‘The Magic Band’. This was followed closely by a whistle-stop round of national and international tour dates, including not only a headline slot at Midsummer Music Festival but also the closing slot on the main stage at Insider Festival. Plans for a feature documentary are in the pipe-line too…

Many thanks to Brano from ABO Photography for the class shots!