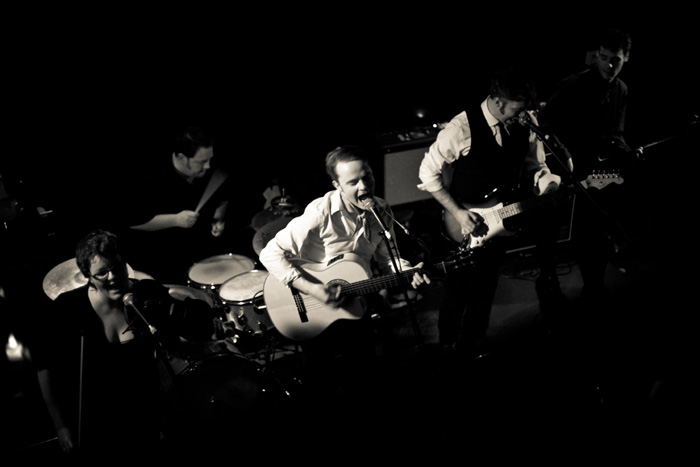 A New International celebrate the release of their debut album, Come to the Fabulon, with a short European tour in February beginning with consecutive dates in their home cities of Edinburgh and Glasgow.

Recorded and produced in Sheffield by Colin Elliot, producer, co-writer and bassist with Richard Hawley, Come to the Fabulon is a lush, poetic rush of bitter-sweet romanticism; an evocative mixture of cinematic strings, circus lights, carnival and cabaret, music hall, gypsy, chanson, a little bit of folk, a little bit of flamenco, yet with pop at its beating heart – welcome to the world of A New International. Reference points for the uninitiated include Scott Walker, Calexico, Beirut, Ennio Morricone…

Formed in 2013 from the ashes of The Starlets, creators of ‘some of the finest pop songs you’ve never heard’ (Sunday Herald), stage-sharers and contemporaries of fellow Scots Belle and Sebastian and Camera Obscura, The Starlets walked the path of most resistance despite playing sold-out shows in Japan and wowing mainland Europe with their ‘staggeringly beautiful’ (The List) live shows.  The band’s foreign adventures provided the context and inspiration for a musical transformation and their rebirth as A New International.

‘One of Scotland’s finest, most underrated bands’ (The Scotsman)

‘Walk past the Crusty Cob cafe in Neepsend, Sheffield, turn right at the heaped bags of Archie’s Chippers Premium Potatoes, and there, up a winding staircase, nestles Yellow Arch studios where, hunched over the mixing desk, you’ll find critically-acclaimed producer Colin Elliot, well known for his production work with Richard Hawley and many others. Mr Elliot and the band bonded over a shared love of Scott Walker’s “Scott 3”, FC Barcelona and malt whisky. The resulting album, “Come to the Fabulon”, is a melodic box of delights.

‘Many moments of beauty’ The Independent)

Check out the excellent video for Valentino (as premiered by Clash Magazine) below.

Rally & Broad is the brain-child of Jenny Lindsay and Rachel McCrum, who met in the summer of 2011, sharing stories, poetry and many Birds N Bees during the Edinburgh festival season. Both of them poets, promoters and performers in their own right who could regularly be found running, hosting and appearing at poetry events, they looked around the scene and felt an itch to do something to give it a boost. And lo, over much wine and hilarity, they did hatch a plan… In a nutshell, this planning has led to them running or being part of around 200 gigs in 2014 alone. As well as their regular Rally & Broad events in Edinburgh and Glasgow, they are much sought after as hosts, planners, poets, panelists and performers all around the country.

‘What you get from attending nights like this is a strong sense that something as simple as the human voice speaking beautiful words sincerely meant can cut through all the snares and distractions of our modern lives’ (Peter Ross, Scotland on Sunday)

Caro Bridges is originally from Norwich (A Fine City) and has been writing and performing her melodic folk and jazz influenced songs around Edinburgh since 2009.

Mr. Twonkey (aka Paul Vickers) is mad as a cricket bat and fast as a silver hare. A surreal act of twisted songs, adult fairytales and games that feature elaborate props. He mixes funny anecdotes and heartfelt moments creating an enjoyable uniquely Twonkey vision of a better world.

★★★★  ‘A dog’s dinner of unexpected, absurd, even offensive content. It’s also a classic’ (Time Out)
★★★★ ‘A Sublime cloud of nonsense’ (The Scotsman)
★★★★ ‘Oddly entertaining and utterly bizarre’ (Fringe Guru)
★★★★ ‘Mind-boggling from start to finish’ (Broadway Baby)

Dare yourself to sample a Dadaist cheese counter.  Sacked from Looney Tunes during a purple patch and ready to snap.  A true British eccentric in the mould of Vivian Stanshall or Ivor Cutler.  Fast becoming an Edinburgh Fringe institution.